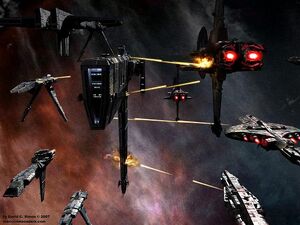 The Republic Armed Space Force gathered a large fleet of ships in the White-Rim system, hoping to set a trap for the Cirin Defence Force. It would be the first major incident of The Second Cirin-Darani War

The R.A.S.F. had the Sirius, a Castellan-class Carrier and two of the Republic's new Tempest-class Battleships together with many other Starships including Destroyers, Frigates and the vessel's Fighter, Heavy Fighter and Bomber complements.

Waiting in ambush the R.A.S.F. suddenly found the C.D.F. had jumped a large fleet into direct contact with their own and the fight quickly turned into a bloody furball as Spacecraft and Starships engaged each other a point-blank range with devastating results for both sides.

A Darani fighter-pilot, Kari Tyrell, chased a Kestrel Fighter some distance from the main engagement area to a C.D.F. Sparrow-class Carrier, which was an unknown class of ship to the R.A.S.F. before the battle, and witnessed it deploying a significant number of Fighters and Bombers to outflank the Sirius. Kari immediately retreated towards the main fleet and communicated the situation ahead of her, allowing Commander Patrick Jennison to rally a counter attack and intercept the inbound Spacecraft.

Commander Patrick Jennison intercepted the C.D.F Fighters in time to assist Kari Tyrell who appeared to be single handedly foiling the flanking maneuver on the Sirius and successfully held them at bay until the conclusion of the battle.

Both the C.D.F. and the R.A.S.F. concluded the battle with significant losses on both sides. It was the first time that Darani lives had been lost in a homespace battle and they also suffered the loss of one of their new Tempest-class Battleships. However, the R.A.S.F. appear to be recovering their losses faster than the C.D.F. and have since managed to begin the Farhaven Siege Campaign with little contest from the Cirin Alliance.

Kari Tyrell's guncam footage was edited and leaked to the public, creating the blief by many that she had killed a significant number of Alliance Fighters and almost single-handedly saved the Republic fleet from annihilation. She was promoted to Commander, the youngest to ever achieve the rank, and became known as the Hero of White-Rim.

Retrieved from "https://crimsondark.fandom.com/wiki/Battle_of_White-Rim?oldid=4885"
Community content is available under CC-BY-SA unless otherwise noted.