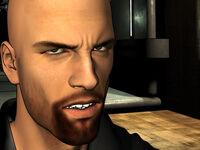 Vrae's ties to the Cirin Alliance eventually lead him to an ill advised involvement in the Battle of Farhaven - an operation for which his ship was neither designed nor equipped. After participating in the initial hit-and-run attacks on the Darani defence grid he then answered Admiral Norvosi's call for reinforcements and joined the general engagement. Some time shortly thereafter the Katherine's Glance was engaged and destroyed by an unknown Coalition warship and was lost with all hands.