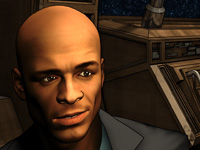 Vaegyr is the captain of Niobe. Having run away from both his family- and his homeworld- as a teenager, Vaegyr spent several years jumping from one ship to another, doing whatever jobs were available and learning much along the way. How he came to be the sole owner of Niobe is a mystery, but he always grins slyly when the question is raised. CD Database-Characters

Vaegyr is an aethiopian male of above average height and strong build, bald, but frequently seen with a few days of facial hair growth, and brown eyes. He usually wears a dark trench coat, shirt, and trousers with boots.

Vaegyr rarely takes things for granted, but is generally an optimist and approaches goals with an intention to succeed in the sense that even when the task isn't going completely to plan, he's always looking for a way to make it work. Despite the stigma and personality generally associated with people in his profession, Vaegyr has a sense of honour and compassion, particularly for his crew (including former crew members), that tends to earn him a certain level of loyalty and respect from all (possibly even Hal). He has a good knack for diplomacy and a charming personality that has earned him some friends in both high and low places over his years in space.

Initially, Vaegyr's dream was to own his own spaceship, which he achieved with Niobe. Vagyr also had a great desire from a young age to join the R.A.S.F. at one point, but ultimately was refused. It is unclear if his intentions were to specifically fight with the Republic or against the Alliance, but it may have been an early attempt to gain command of a spaceship before he obtained Niobe. For approximately one year, Vagyr was intent to make a living as a privateer, but he re-evaluated his goals after receiving information about his family from Sapphira and tracked them down. Its unclear what his present objectives are, but he likely wishes to leave gaol and regain Niobe or another ship.

Born on Farhaven, Vaegyr was raised by his mother and an abusive father until the age of 15, when he attacked his father with a knife and ran away into space, eventually leaving the Republic to evade arrest. Vagyr spent several years working various jobs, gaining contacts, knowledge and experience until he eventually obtained the Niobe through unknown means. He eventually met, and married, Niobe's current pilot Larissa six years ago before attempting to join the R.A.S.F. He was rejected when he refused to renounce his Cirin citizenship, but was given a marque to act as a privateer in service to the Republic instead. Since then, Vagyr has had a string of successes and near misses until rescuing Kari while scavenging the debris of the Danzig.