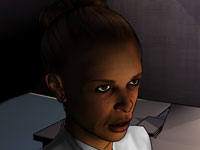 Commodore Pearson is the commanding officer assigned to Espenson Station. Though nominally responsible for the station's military aspects, she is often called upon to adjudicate civilian matters as well. Pearson is quite prepared to bend the law given the right circumstances, but is fervantly loyal to the Republic.

Retrieved from "https://crimsondark.fandom.com/wiki/Commodore_Adelaide_Fae_Pearson?oldid=4519"
Community content is available under CC-BY-SA unless otherwise noted.