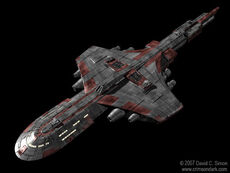 Though a little underpowered for its size, the Daimyo is nonetheless a formidable warship and plays a central role in any Alliance battlefleet.

AWS Tobruk, the command of Captain Alison Norvosi prior to her elevation to flag rank. First appeared during the Prospero incident where, responding to a distress call she engaged and drove off the Darokini Vashnir class Destroyer RS Helikaon and arrested the Niobe and Her crew. The Tobruk may or may not have been one of the unnamed Daimyos present at the Battle of Farhaven. Her current fate is unknown.

Retrieved from "https://crimsondark.fandom.com/wiki/Daimyo_class_Heavy_Cruiser?oldid=5028"
Community content is available under CC-BY-SA unless otherwise noted.