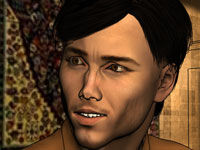 Twenty-five years old, Daniel joined Niobe as ship’s medic after leaving a lucrative practice on the Republic world of Gaidana. An evangelical Christian, he has a reputation for being something of a ‘Bible basher’. He does not seem to mind the characterisation. CD Database-Characters