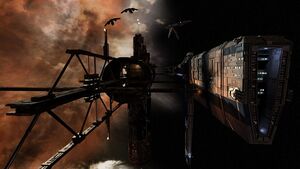 The R.S. Antalya, a Tempest class Battleship conducts a routine stopover to refuel at Otago Station in the Tihirau nebula leaving it vulnerable for the duration of the resupply opperation. They are fortunate to have the experienced Fighter-pilot Stardust temporarily assigned to them in order to train the less experienced pilots when the routine operations quickly become a nightmare.

The R.S. Antalya, a Tempest-class Battleships, the vessel and station's Fighter, Heavy Fighter and Bomber complements and other Starships.

The entire story, and results, can be read in full by signing up to the Crimson Dark Supporter's Club where you will gain access to the story of Distant Thunder along with many other exclusive Crimson Dark related short-stories and wallpapers.

Retrieved from "https://crimsondark.fandom.com/wiki/Distant_Thunder?oldid=4532"
Community content is available under CC-BY-SA unless otherwise noted.