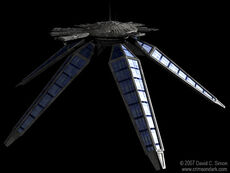 A joint venture between the R.A.S.F. and Radiant Industries, Espenson Station represents the pinnacle of Republic engineering. Though a military base designed for maintaining and repairing capital ships, the station is home to over 10,000 souls and functions like a town where the majority of the population work in the private sector.

Retrieved from "https://crimsondark.fandom.com/wiki/Espenson_Station?oldid=4771"
Community content is available under CC-BY-SA unless otherwise noted.