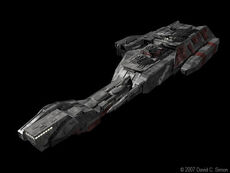 Though small for a Destroyer, the Gerushda carries significant firepower and has earned a reputation as a 'Cap-Killer' for its remarkably high kill ratio against other capital ships. With three by three main guns, four smaller guns and eight point-defense turrets the Gerushda is already a match for most warships of its size, but the addition of a fixed, forward firing energy lance - capable of cutting through starship hulls like butter - makes it a formidable threat to anything smaller than a battleship.

Retrieved from "https://crimsondark.fandom.com/wiki/Gerushda_class_Destroyer?oldid=5035"
Community content is available under CC-BY-SA unless otherwise noted.