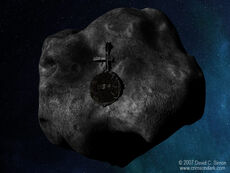 Golgotha was established by an enterprise corporation as a mining station, shipyard and launching platform for a bold new move into unexplored space. At the time it was called "Outreach Station". However, the company failed to find any habitable planets beyond claimed space, and could not secure the major investment needed for terraforming operations. Eventually the company collapsed, with most of its assets being swallowed up by Radiant Industries. Outreach Station, however, was too far from any major population centres to be of any real commercial value, so Radiant Industries auctioned it off to the Creer Syndicate, also known as the seven families. Now, 160 years later, the station has become a haven for pirates, smugglers and racketeers - and is even host to an increasing number of legitimate (though potentially unpopular) business operations together with being the Syndicate's primary base of operations. The station includes a large habitat section, a shipyard and docks.

Though David spent many weeks constructing Golgotha, he didn't settle on a name for it until the last minute. Its working name (which he had no intention of using) was Tortuga. The model takes up 100Mb hard disk space and measures 8092 x 4096 pixels.

Retrieved from "https://crimsondark.fandom.com/wiki/Golgotha?oldid=4776"
Community content is available under CC-BY-SA unless otherwise noted.