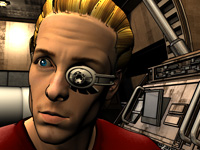 Hal was eventually killed in ship-to-ship combat when he attacked a CDF squadron on a training mission.

Hal is a caucasian man of average height and build with short, blonde hair and a single blue eye, as his left eye is covered by an ocular aug. Hal is often seen attired in a t-shirt, trousers and sneakers.

Following the incident on the Prospero where Hal was shot in the leg by Dr. Daniel Qian and the subsequent amputation of the damaged limb, Hal separated from the Niobids on hostile terms. Hal re-surfaced approximately six months later in command of a salvage ship in a junk field orbiting Wakea V. Hal then tried his hand at piracy, when he attempted to forcibly salvage a CDF Training Squadron taking part in a graduation exercise under the direction of his former crewmate, Commander Kari Tyrell. The engagement was ended when the training squadron's Green Leader, Lieutenant Rachit, made a kamikaze run on the bridge of Hal's ship, killing both Hal and Lieutenant Rachit in the ensuing explosion.

Retrieved from "https://crimsondark.fandom.com/wiki/Hal_Grisdale?oldid=5046"
Community content is available under CC-BY-SA unless otherwise noted.