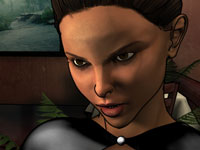 As well as being Niobe’s pilot, Larissa is also married to her captain, Vaegyr. Formerly trained by the R.A.S.F. to pilot corvette class starships, Larissa has not revealed why she did not pursue a career in the military.

Larissa's goals appear to be little more than a desire to fly in space and be with her husband. However, with the incarceration of Vaegyr by the Cirin Alliance, Larissa has become determined to set him free and keep him safe, killing Argurious Mensk for his persistent attempts to kill the Niobids or prevent her from freeing Vaegyr.

Retrieved from "https://crimsondark.fandom.com/wiki/Larissa_Ward?oldid=4006"
Community content is available under CC-BY-SA unless otherwise noted.