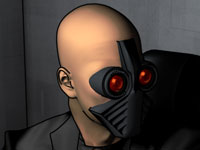 Mr Creed is Commodore Pearson's personal assistant, private seceratary and all-round point-man. He is a stickler for proper procedure and, though generally amiable, has a tendency to irritate those who don't conform to his standards. CD Database-Characters

Retrieved from "https://crimsondark.fandom.com/wiki/Mr_Creed?oldid=4848"
Community content is available under CC-BY-SA unless otherwise noted.