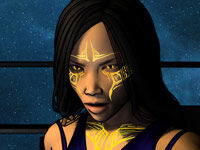 Elected as Arbitrator of the Creer Syndicate by the seven families (in a vote split 4/3), Sapphira's main role is to stop the families from tearing each other to pieces. She takes her responsibilities very seriously and has demonstrated a mixture of diplomacy and ruthlesness which has brought the families into line.

Sapphira replaced Argurious Mensk as Arbitrator for the Creer Syndicate with a majority vote by the seven families of 4 to 3. Since then she has worked hard to settle unrest in the Syndicate and extend its influence, granting special privledges and immunity to people such as the Niobids for their assistance in providing information and contacts in both the Republic of Daranir and the Cirin Alliance.