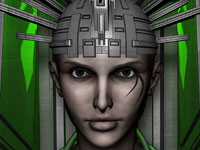 "This station is mine, bitches."

Weaknesses: Provocable, Intolerance for Hal (debatable as a weakness)

Sarah was the Controller for Espenson Station, and as such was normally referred to as "Control" when she was on duty. Once a crewmember aboard Niobe, she still keeps in touch with Vaegyr Ward whenever the opportunity arises. She called on them for help when the Republic decided to incarcerate her after the station was attacked and she was rendered unconcious. CD Database-Characters

Sarah is a caucasian woman of average height and slight build with short, dark hair (bald during her time as a Controller) and brown eyes together with incredibly pale skin and a number of body markings, including a curving mark under her left eye, which are likely class A, cosmetic augs. She is normally dressed in a Goth fashion with skin-tight, dark pants or skirt and a dark sleevless top.

Sarah does not suffer insults well and is easily provoked or irritated, but she also has a flair for the dramatic, even in the face of danger, and is incredibly intelligent. She doesn't always trust all her former employers, or even her friends, and will often leave safeguards in case they pose problems for her in the future or she needs to utilise their resources without permission. However, she doesn't forget her friends either and will assist them when asked and able.

Sarah's goals are unclear but presently she seems keen to escape the Republic of Daranir who incarcerated her and is willing to defect to the Cirin Alliance to do so.

Sarah has an excellent knowledge of engineering and A.I. Programming and worked in Grey Station as an A.I. Technician at one point before joining Niobe where she initially served in only one of the Engineering or Cybernetics roles but had to cover both after another crew member left. Sometime after Hal Grisdale was hired to perform the engineering role she quit and become the Controller of Espenson Station where she served for 6 months before she was incarcerated after a suicide attack on the station.

The Making of Sarah

Retrieved from "https://crimsondark.fandom.com/wiki/Sarah_Endetta?oldid=4907"
Community content is available under CC-BY-SA unless otherwise noted.