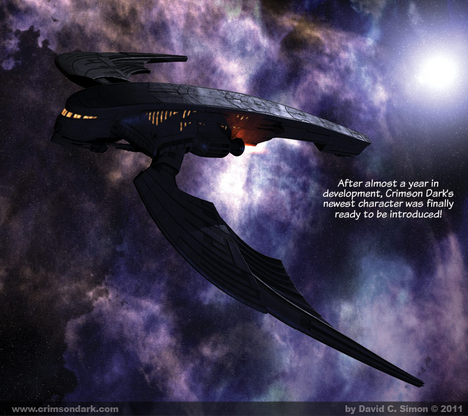 The Scar ... or, to give her her full name I.S.V. Scarborough is a corvette type spaceship of an unspecified class; possibly custom built. Constructed to high end civilian specifications - close to military grade in point of fact, well armed with high end technology (including variable geometery stabilisers) and a designer interior she bears all the hallmarks of her origins as the personal transport of the Creer Syndicate magnate Argurious Mensk.

Following the mysterious disappearance of Mr. Mensk during a business voyage in Republic of Daranir space, Scar has since be re-registered under a Cirin Alliance flag to a Captain Vaegyr Anderson Ward, leader of the Niobids, in circumstances that remain unclear.

Full technical details of the Scar have not yet entered the public domain but a set of speculative drawings can be found at: [1]'

Retrieved from "https://crimsondark.fandom.com/wiki/Scar?oldid=5053"
Community content is available under CC-BY-SA unless otherwise noted.