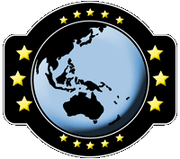 For over three centuries the allied colonies were governed by the Earth Alliance, until the twenty-fifth century when an insurrection turned into civil war, now called the ‘War of Independence.' The Earth Alliance’s final actions were to partition the outer colonies into three states and seven protectorates, and establish the United Terran Coalition. All member nations of the UTC are governed by universal laws and enjoy trade and political benefits. In the last two-hundred years, the number of states has increased to six, and the number of protectorates has varied considerably.

Not all governments are formally recognised by the UTC, and some are subject to sanctions and even embargos. Although the member states of the UTC are the wealthiest of nations, the protectorates and non-aligned governments often express their anger at being ‘abandoned’ by the Coalition.

Retrieved from "https://crimsondark.fandom.com/wiki/The_United_Terran_Coalition?oldid=4646"
Community content is available under CC-BY-SA unless otherwise noted.