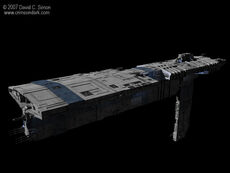 Following the launch of the Castellan and Tempest , it was time for the R.A.S.F. to replace the aging Horizon class Destroyer . Drawing heavily upon lessons learned from the Tempest , and borrowing a great deal from its general layout, the Vashnir represents the state-of-the art for Republic engineering. Though comissioned before the outbreak of war, the Vashnir was not in wide use until several months after the Battle of White-Rim. Though not as heavily armed as the Tempest , the Vashnir's better mobility and flexible design make it well-suited to lone wolf operations, though they remain most effective when operating with support vessels.

The Helikaon appears repeatedly in the narrative - first in Chapter 8 where she is responsible for the crippling of the Niobe and the destruction of the Prospero (presumably including the earlier murder of the majority of her crew) before being driven off by the AWS Tobruk, and later in Chapter 12 where she fights at the Battle of Farhaven in which she receives drive damage from an attack by the Scar. Fate currently unknown.

Retrieved from "https://crimsondark.fandom.com/wiki/Vashnir_class_Destroyer?oldid=5020"
Community content is available under CC-BY-SA unless otherwise noted.