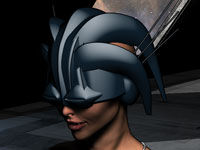 Whisper has never divulged her real name, or even admitted that she has one. Though playful and talkative, she never speaks about her life before Niobe. Her augmentations are extensive, covering most of her body, and she is Niobe’s expert on augmentation and cybernetics. No-one really knows what extra abilities her augmentations might grant her. CD Database-Characters

Whisper is effectively a genius and not a modest one, often seeing and observing the general populace as a person might observe ants and other insects. Despite her significant intelligence she suffers from depression at having killed her parents and suffered injuries requiring her to use augs due to a home fire she started. However she comes across as playful and often childish in her demeanor, manipulating others as she would a computer for amusement or offering detailed scientific analysis to show off her intellect. In spite of this attitude, Whisper does have a soft side and sported a crush on Daniel for sometime, being too shy or fearful of rejection to confront him about it until Kari encouraged her to act.

Whisper was likely born and raised on Gaidana as the child of two influential members in the Creer Syndicate until the age of 14 when she started a fire in the family home that killed them and seriously injured her. For the next six years she underwent significant treatment that resulted in much of her body being augmented. These augmentations required several upgrades due to her growing body, but a strong friendship with a nurse, Craig, kept her sane and saw her through the whole ordeal. She left for space once she was finished with treatment and enlisted with Vaegyr on Niobe as a Privateer for the Republic of Daranir.

Retrieved from "https://crimsondark.fandom.com/wiki/Whisper?oldid=4959"
Community content is available under CC-BY-SA unless otherwise noted.